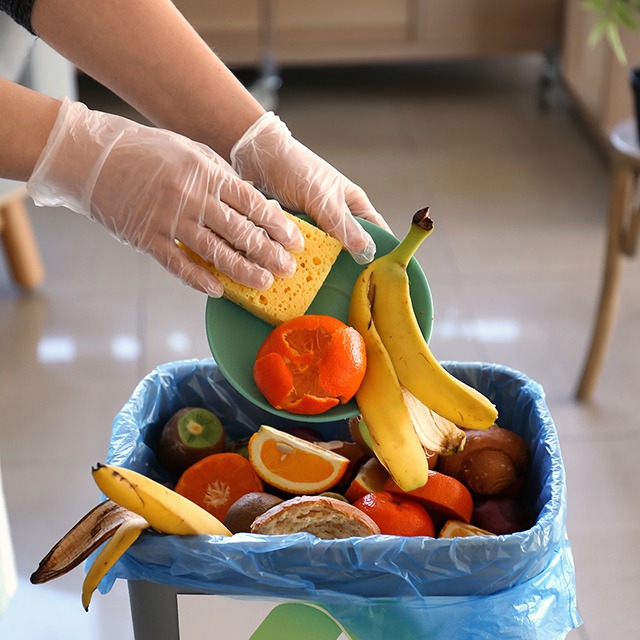 We collect food waste from your premises and ensure that 100% of the food waste is recycled via a local bio plant.

We provide 240-litre food waste recycling bins; upon collection we replace the bin liner and use a sanitizer to freshen each food waste recyling bin.

Segregating your food waste into recycling bins helps reduce the weight in your general waste bins and is a great way to protect the environment as all food waste is turned into compost.

What can be put into Food Waste Recycling Bins?

What cannot be put into Food Waste Recycling Bins?

Food Waste Recycling in the UK and Worldwide

The United Nations estimates that a third of all food produced globally is lost or wasted each year, totalling 1.3 billion tons. That's enough to feed the world's hungry many times over. And it's not just a developing world problem. In the UK 4.5 million tonnes of food are thrown away by households annually.

The good news is that there are many ways to reduce food waste, and recycling is one of them.

How Food Waste is Recycled

The key to successful food waste recycling is to keep it out of the landfill. Landfills are a major source of methane, a powerful greenhouse gas. When food waste decomposes in a landfill, it produces methane. When food waste goes to landfill, it decomposes under uncontrolled conditions and releases methane, which is 23x more dangerous to the planet than carbon dioxide. The bottom line is that food waste is a problem that we can all do something about.

The UK is a global leader in tackling food waste, with the government pledging to reduce food waste by 20% by 2025, total food waste levels falling by 480,000 tonnes between 2015 and 2018 and the Environment Bill committing to eliminating food waste from landfill by 2030.

The UK government has confirmed that the new legislation will introduce a clear set of recyclable materials for both household and commercial waste, including the separation of dry and organic waste collections.

It is likely that companies producing over a set threshold of food waste will be required to recycle it, similar to the legislation currently in place in Scotland and that fines will be served to those who don’t comply.